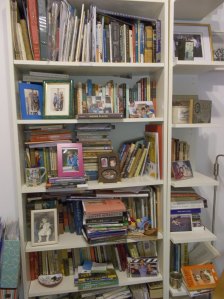 On August 1, 2012, the 45th anniversary of my arrival in Israel to attend a one-year college program, I’ll be cleaning out the bookshelves in my office.  I’m ready to say good-bye to The Puritans: A Sourcebook of Their Writings edited by Perry Miller and Thomas N. Johnson and Sources of the American Mind: A Collection of Documents and Texts in American Intellectual History, edited by Loren Baritz.  It’s final:  I won’t be going to Johns Hopkins to do a PhD in American History.

I had visited little Israel in the summer of 1966, before my “aliyah” in 1967. Israel was eighteen; I was twenty-one. We were both on the cusp of a growth spurt.  When I returned on August 1, 1967, a college grad in search of meaning before beginning the PhD at Hopkins, Israel had become obese.

Being young impressionable and in need of an ideology, I found meaning and exuberance in Jerusalem. Little children sang “Jerusalem of Gold” on every dusty street. “Victory” smiled; I believed in IDF paratroopers. Israeli strangers asked me, “Are you staying?” as if I did not have an academic trajectory, as if I had no family in Cleveland. But I was young, impressionable, malleable, labile, open, given to guilt, searching, wandering, wondering, in short, bait for the Jewish State.

Of course I stayed. I never intended to “make aliyah,” but I had three years to buy a Danish couch and American fridge tax-free. The deal paled next to Cotton Mather and Tom Paine.

I became a  Zionist from reading excerpts of  Zionist thinkers in The Zionist Idea: A Historical Analysis and Reader, edited by Arthur Hertzberg. Harvesting real grapefruits at Kibbutz Ginosar and fishing in the Sea of Galilee at 4 AM also helped. Rather than study America’s Revolution, I began my own.

I’m also sending to the recycling bin Six Weeks to Words of Power by Wilfred Funk, 1960 edition. If I haven’t found those six weeks in the last forty-five years, I doubt I will find them soon. As I finger through the book, I find “Nouns of Emotion” on page 110: malignity, chagrin, travail, trepidation, revulsion, umbrage, recrimination, frustration, nostalgia and altercation. Some of these remind me of the way I feel about Israel today.

Yet, I never cease to marvel at the miracle that has transpired here—the roads, trains, medicine, hi tech, landscaping, high rises, spas, majadra, design, music, dance, drip-irrigation, the absorptions of millions of people from all over the world, one by one; the training and re-training, the languages, communities, cities, papayas, parks.  I take none of this for granted, because in 1966 I saw a modest Israel. That was the Israel with which I fell in love, actually, the Israel of Hyssop, as opposed to today’s Israel of Cedars (pride).

Yet, in 1968 I sat on the sidewalk on Jaffa Road to cheer the glorious tanks as they rolled by in Israel’s military victory parade, the beautiful tankistim sitting on top like guardian angels. I believed in Israeli soldiers and even married one.  Ahh, those dark amber boots,  that green uniform, the mustache and beard redolent with Sinai sand. With fury I waved my plastic flag.

Now, forty-five years after coming into the state, like getting rid of old books, I have shed ideologies and am wary of nationalism. During my cleansing of the bookshelves, I discover Unease in Zion edited by Ehud Ben Ezer, 1974. This is a book I decide to keep.  There I find a disturbing interview with Yeshayahu Leibowitz in which I read the following:

“The exaltation of the State as an apparatus of administration and control, irrelative of its character and content is Fascism. The State of Israel’s survival has no meaning unless it continues the history of the Jewish People. And if it does not do so there is no meaning to its existence, nor does it even have any right to exist . . . If the present situation, that is the keeping of a million and a half Arabs under our control, becomes stabilized, the results will be: first—the destruction of the State of Israel; second—the destruction of the entire Jewish people as a result of the severance of the State from the Jewish people and its total concentration on the problems of retaining control; third—the subversion of the entire democratic and social structure of our society, both from the standpoint of the State’s being transformed into a police (or more correctly secret-police) State and by the creation of a laboring class of Arabs ruled over by Jewish foremen, supervisors, officials, policemen and soldiers. . . . Since there is no prospect of achieving peace we must at once this very night, get out of the territories inhabited by a million and a half Arabs, barricade ourselves in our Jewish State and invest our entire strength in maintaining it.”

Removing clutter yields clarity. Unfortunately, today’s clarity is a painful question with which I begin the next forty-five years:  Can I reconcile the behavior of this particular Jewish state with my innate love of Israel? 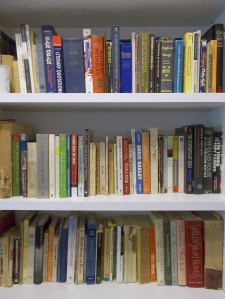 I'm a writer and teacher of writing.
View all posts by Judy Labensohn →
This entry was posted in Israel, Uncategorized, Zionism and tagged Aliyah, Yeshayahu Leibowitz. Bookmark the permalink.

10 Responses to Forty-five Years in Israel