During the past year, I have walked on Jaffa Road every Sunday morning at 8:30 on my way to The Writing Gym. Jaffa Road is the main downtown thoroughfare on the western (Jewish, Israeli) side of the Undivided City of Jerusalem, the Eternal Capital of the Undivided Jewish People. For eleven years Jerusalemites suffered while Jaffa Road endured a facelift, bringing  it from the dank 19th to the enlightened 21st century. Now it is clean and ready for wear. To celebrate the 46Th Anniversary of Jerusalem’s unification, I invite you to join me on an early morning walk and quiz.

See how clean Jaffa Road is at 8:30 in the morning. The dominant color is gray. Very classy. It goes nicely with rosy beige Jerusalem stone.

The Hebrew letters on the light pole  spell Jerusalem.

Who left an empty glass on this bench? 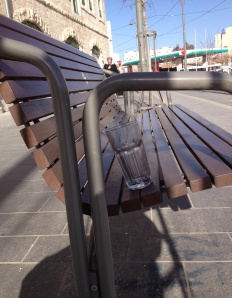 A. the Ethiopian street cleaner

B. the Russian store owner who sells girly magazines

D. the Sabra who designed the bench

After the renovations  and the introduction of the Lite Rail, Jaffa Road  looks like:

A. a Hollywood set

B. a Bollywood set

C. a Byzantine city on the edge of a desert

D. a British Mandate city on the edge of a desert

F. none of the above

G. all of the above

Why is nobody sitting on this bench?

B. it’s bad for the back

C. it’s forbidden in a city bylaw for men to sit on a bench that may have been used by a menstruating woman

D. all of the above

Which newspaper is Hungarian? 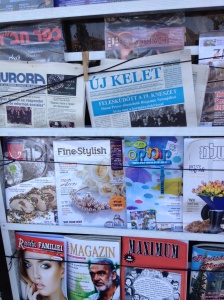 I lift up my eyes to the mountains and what do I see?  (4 extra points) 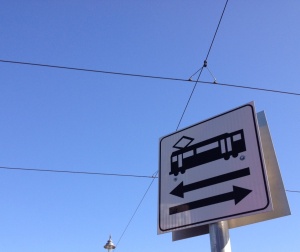 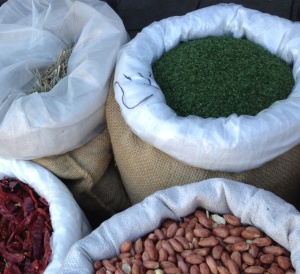 Why do some tourists come to Jerusalem to buy rogelach?

A. because they don’t sell it in New York

B. because it’s the best in the world

C. because it’s free on Jaffa Road on Sunday mornings at 8:30 AM

D. because the air of Jerusalem makes one wise and when rogelach sits in the open air    those who eat it become wise

The Peace River Kabbalistic Yeshiva is holding a special meeting. Why? 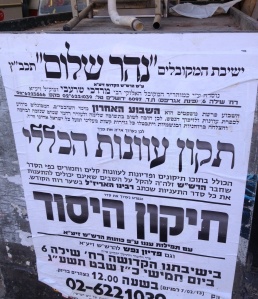 A.  a general cleansing of sins

B.  to vote for Madonna’s membership

C. to discuss how to avoid the draft

D. to re-evaluate its marketing strategy 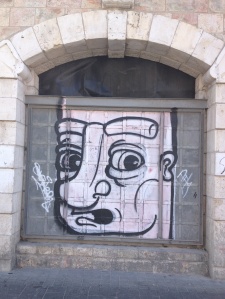 Who is this man?

D.  none of the above

The Lions on either side of the door symbolize:

B.  The Municipality of the Eternal and Undivided City of Jerusalem

To where does this alley lead?

I hope you have enjoyed your stroll down Jaffa Road after forty-six years of unification. Please put your Comments in the section below. The winner will receive one of the following:

A. a tour of the gray Separation Fence that surrounds Jerusalem

B. a tour of new Jewish housing projects on the eastern Arab side of the United City

C. a tour of villages that pay municipal taxes but live beyond the Separation Fence

D. a tour of the United City from Wallaja

Happy Jerusalem Day to all those who pray for the peace of Jerusalem!

I'm a writer and teacher of writing.
View all posts by Judy Labensohn →
This entry was posted in Jerusalem, Uncategorized and tagged Eternal Capital of the Undivided Jewish People, Jaffa Road, Unification of Jerusalem. Bookmark the permalink.