A Day in the Slice of a Writer

It’s 12:22 PM and I still haven’t been able to sit down to work on my memoir. I did my morning stretches, drank hot water with lemon, followed by black coffee, ate my morning oatmeal and millet with date, walnuts and chia, (Forgot to throw in the ground flax seeds.) read the morning newspaper cover to cover, both national and international news and now rather than sit down and work on my memoir-nearing-completion, (It’s been nearing completion for thirty years.) I prefer to write this slice of life. Then, maybe I will take a walk in the wadi,  read a few stories in Alice Munro’s Dear Life for the book club and call to make an appointment for an eye examination  for my driver’s license, having arrived at the age when annual eye tests are a prereq for renewing the license, and then and then . . . there are the black beans that need cooking in the pressure cooker which demands my standing nearby, lest the cooker explode, the continuous attempt to get my electric space heaters to work in sync so I won’t freeze or sweat during the five remaining hours of daylight, the coughing up of phlegm and blowing my left nostril with silk Kleenex dipped in aloe lotion—winter rituals especially prevalent during a slight cold—and mainly, mainly, the effort exerted to not think about the minor procedure on my right nostril two days ago.

As far as procedures go, mine was a best case scenario: outpatient, local anesthetic, a cut here, a slice there, no big deal compared to invasive intestinal procedures that can take ten hours under the knife. So why this anxiety, this unease, this avoidance of focus on work?

“It looks like a crater,” said the plastic surgeon as he sliced a hole on the side of my right nostril. His tone was comforting and matter of fact.  I didn’t digest the content. The local anesthetic may have seeped into my brain. He was an expert on the Mohs procedure,  using it to take out a morpheaform basal cell carcinoma. Later, when I got home, crater sounded melodramatic. I needed a more modest metaphor and found it in the shallow bowl in which I serve home-made tehina.

At home I thought I’d reread Gogol’s “The Nose,” but all I could  think about were my options after the doctor would take off the bandage next week. I came up with three: 1. Join a freak show; 2. Become a poster woman for the Israel Cancer Association; 3. Lobby for lowering the price of sunscreen in Israel.

David, my wise partner, suggested I wait to see what the nose would look like without the bandage. Of course this made sense, but I was already determined to turn my scar into a PR ploy. I would glue fake diamonds, rubies or emeralds inside the oval bowl on my nose. I would draw attention to it, create a fashion statement with glitter. I would tell everyone who stared at me, “Use sunscreen! Wear hats with wide rims!”

My own skin doctor, who did the original biopsy that came up with “morpheaform basal cell carcinoma,”  does not believe in sunscreen and thinks it may cause more problems than it solves, but this plastic surgeon, the Mohs expert, believes in sunscreen with over 30 SPF. Once I’m fully recovered from this current slice, I plan to use both sunscreen and hat and possibly my  parasol. And I want to talk to students at Shenkar College of Engineering,  Design and Art in Ramat Gan. I want to ask them to design head gear that covers the nose and whole face.

Why should only Bedouin and Muslim women protect their skin from the sun, wear the niqab? I, being the blonde child of Ashkenazi parents, will wholeheartedly cover my secular face, as long as the covering has some pizzazz.

Many people I know believe in keeping medical issues private, but I am not one of them. I believe we get support from each other and our own experiences can help others. I also have this need to put myself into the world via the page, to turn myself inside out, to make the hidden known, reveal that which is concealed. Why else write? Why else did I run to the skin doctor when I felt a lump inside my nose?

One needs a lot of strength and courage to stand up against the Beautiful-Skin industry, the anti-aging industry, the anti-human industry. But stand up I will, at least on the page. I have earned my wrinkles and I have earned my crater/tehina bowl. A close-up photo, non-photo-chopped, may not make the cover of Vogue, or even Mad Magazine, but it reveals the truth of that face, with all its historical landmarks, scars, sun spots and forced smile. 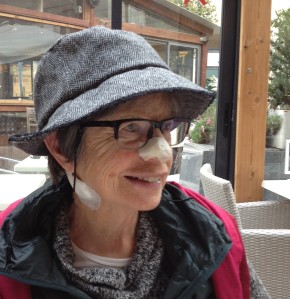 So why the anxiety? Even though the excision is an out-patient procedure, when it happens on your own nose, the nose that has found comfort in the middle of your face for nearly seventy years, the nose that remembers your thumb sucking and nosebleeds, your blackheads and glasses, the nose that channels every breath of life, then, by God, it is a big deal.

Now, hopefully, after getting my sliced nose off my chest and into your face, I will be able to sit down and write my book.

I'm a writer and teacher of writing.
View all posts by Judy Labensohn →
This entry was posted in Not writing, Uncategorized and tagged Mohs, morpheaform basal cell carcinoma, slice of life. Bookmark the permalink.

21 Responses to A Day in the Slice of a Writer