I can’t believe I haven’t written a blog post since  October 2016. What Happened? Where have I been? My writing mind was tied up getting used to a new apartment.  There were days when I contemplated stopping to write altogether. I had nothing to say. Though I did write a few  first drafts, none of them seemed urgent enough to make me want to share them,  especially when the world was falling apart in Europe, England and then America.

January and February came with their drafts and colds and continual phlegm and exhausting bouts of coughing and finally a flu, a fall and a minor operation. Now all that is behind me and I’m feeling my oats, which is to say I haven’t had a nap in two days and I want to start dancing lessons, so I must be getting better. Being over seventy, though, I have  succumbed to the tendency to be obsessed about bodily processes. I can discuss Trump, the Occupation, and Co-housing, but my speech usually reverts to my newly discovered dust allergy, my newly discovered vasovagal syncope, my excised infiltrating basal cell carcinoma, and my day at Ichilov Hospital when the skin on my nose was anesthetized into a brick and then cut and stretched, flapped and sewn.

Despite the world’s ills and woes, the most dramatic change in my own small life is due to  the dust allergy. I’ve always had a high tolerance for dirt. Obsessive cleaning was not a card dealt me at birth. But ever since I was diagnosed with a dust allergy three weeks ago I have been cleaning my floor with a new electric broom everyday. I also brought back my cleaning person after a six month hiatus, after realizing my own cleaning, or lack thereof, might kill me. I could collapse from coughing due to the excrement of dust motes.

I think my late mother is pleased that I am cleaning my house on a regular basis. When I told her that I have this allergy and I bought an electric broom and use it everyday, she smiled and I could tell she was thinking I told you so, but was too kind to say the words out loud. 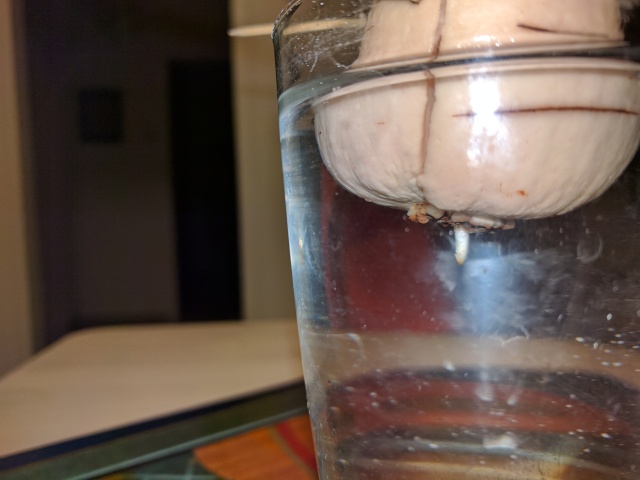 Before the shit hit the fan in January-February, I planted an avocado pit in a glass of water. The root is showing. I take this as a sign that 2017 may yet become a year of growth,  as opposed to one of continual decay.